A Bestek power inverter is essential if you live off the grid, or are used to traveling or living in remote locations where A.C. mains power is unavailable. Power inverters typically use a 12V D.C. battery or battery bank as a source and convert it into 110V A.C. There are many appliances that can only be used if A.C. power is available.

Power inverter technology has been around for quite some time, and there are now many competitive brands on the market. As you tend to use a power inverter somewhere where there is no other mains A.C. power available, you want to make sure that the power inverter you buy is reliable and preferably maintenance free.

It is essential to buy a Bestek power inverter that easily satisfies your power needs. That means making sure that the power rating of the inverter can easily match what you need to use it for. It is also important to make sure that you have the battery capacity to provide power to the inverter. Batteries may be charged in vehicles, through solar panels or wind generators. The best power inverters can automatically warn you before the inverter is asked to provide more power than it can obtain from the battery.

Bestek 300w is a perfect inverter for small AC devices on your camping, road trips. It’s a multi-protection inverter, so don’t worry when leaving it in your car, it protects your car’s interior from damage.
Check Price at Amazon

The Bestek 300W power inverter is the baby of the Bestek power inverter series. It is a handy appliance to have in the car if you need to power any small AC device when you are away from home. You can connect this inverter directly into the cigarette lighter socket, but this does limit what you can plug into less than 200W for safety.

If you want to have your radio on or any audio device, you may find that this Bestek 300W inverter interferes with the sound. A pure sine wave inverter will be a better choice if the noise annoys you.

This Bestek power inverter is a sturdy and compact tool that has enough fail-safe aids built into it to warn of any power surges or low voltage. If you need the inverter for extended use, remember that it is draining your car battery all the time.

This is a handy, compact power inverter that can be used inside a vehicle using a cigarette lighter socket. It can only be used on appliances with low power needs and should not exceed 150 to 200W to prevent overheating. 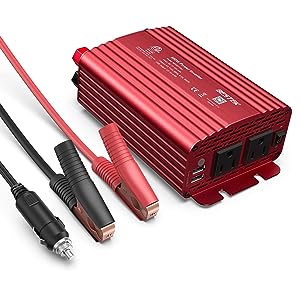 BESTEK 500W is a modified sine wave power inverter for DC 11V – 15V. This inverter has 2 connecting methods so users can connect it to the car with alligator battery clamps or cigarette lighter plug.
Check Price at Amazon

This power inverter has in-built protection typical of all the Bestek range of inverters. Its smart fan adjusts to the ambient and internal temperature to keep the inverter cool. It has a 40W fuse and an alarm when the voltage supply is either too little or too high. The fuse protects the device against short circuits. The inverter package has additional spare 40W fuses.

This 500W inverter is similar to the smaller 300W and 400W Bestek power inverters. The 500W rating means it can handle laptops, lights, and other devices that the smaller inverters may have trouble with. 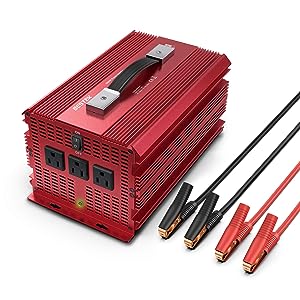 If you need a heavy-duty power inverter for running most appliance you have in your home or on a camping trip, BESTEK 2000W is a perfect choice. With 3 AC sockets, you can plug 3 appliances in it at any one time as long as combined power demands are less than 2000W.
Check Price at Amazon

The Bestek 2000W power inverter is the most powerful in this series. It can provide sufficient power for most AC appliances, except stoves, heavy power tools, and some air compressors.

There are three AC sockets on the Bestek 2000W inverter front end, so 3 appliances could be plugged in at any one time, but make sure that the combined power consumption is less than the rated 2000W.

The Bestek 2000W is a modified sine wave type inverter, so it will create the same noise as other inverters of the same type. It may not be suitable for some appliances like microwaves or hair driers.

The inverter has all the features needed to protect against too low or too high a voltage and short circuits with a 50A fuse, including spares.

This Bestek 2000W power inverter can power just about any appliance you have, including TVs, power tools, fridges, lights, and laptops. It would be marginal for electric stoves and even electric kettles. Just make sure that the combined power demands of all appliances connected to the inverter are less than 2000W. 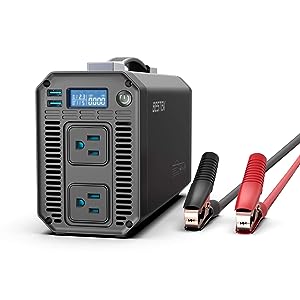 The Bestek 1000W pure sine inverter is a sleek, good looking inverter that is ideally suited for sensitive electronic or digital devices. Pure sine wave inverters are useful for microwaves and hair driers but this 1000W model may only just cope with a typical 800W or 900W microwave.

This inverter has a silent fan, which helps to keep the internal mechanism cool enough. Coupled with the pure sine wave output, it means that there is little or no interference with audio devices like radios and stereo systems.

The Bestek 1000W pure sine wave inverter has two AC sockets and two USB sockets. It should be clamped directly to the 12V battery terminals when the vehicle is at rest or connected to the RV or caravan 12V battery bank. Prolonged use of this inverter can quickly flatten a battery if there is no alternative charging potential like a solar panel or wind generator.

If you have sensitive electronic equipment or have a low tolerance to annoying background electronic noise, then this is a good choice. It is a smart-looking inverter that can supply power for most appliances, including some power tools. 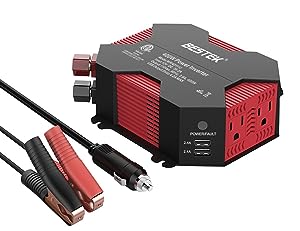 Besides running appliances with less than 400W power needs, Bestek 400W has 4 USB ports, which is perfect for charging small electronic devices when you are on the road or live out of the grid.
Check Price at Amazon

This Bestek 400W power inverter in the middle of the three smaller Bestek power inverters. It can handle all smaller electrical or electronic appliances with a combined power consumption of less than 400W.

The Bestek 400W power inverter can be connected directly to the cigarette lighter socket when you are driving but should be only used for appliances of power rating of less than 150 -200W. The inverter has clamps that can also be directly attached to the car battery while at rest.

This power inverter has all the safety features of the other small Bestek power inverters: a 30A fuse to protect against short circuits, overload and low voltage alarms using the LED indicator.

One of the best small Bestek power inverters as long as it is used for appliances with less than 400W power needs. It can be connected to the cigarette lighter socket or directly to the battery for anything that needs more than 150W.

How Does a Power Inverter Work?

A power inverter converts 12V D.C. power such as you typically get from an automobile battery to 110V A.C. It is a way of providing A.C. mains type power in a place which is not connected to the mains such as a remote location, campsite, etc.

The power inverter works by first converting the direct current to alternating current by passing it through a rectifier and then increasing the voltage to that of normal mains electricity, i.e., 110V. This is done by using a transformer. The better power inverters improve the typically ‘discontinuous’ waves of alternating current by smoothing them out to better replicate normal mains power. These are called pure sine wave power inverters and should be used with digital devices like laptops, microwaves, and some household devices like hair driers

What size inverter do I need?

Power inverters are rated by the amount of power in watts/ kilowatts they can supply on a continuous basis.

The most important decisions about choosing a Bestek power inverter is the type of waveform and the power rating. The Bestek 1000W Pure Sine Wave DC 12V to 110V AC Power Inverter is the best choice for all digital devices that might not run efficiently on modified sine wave power inverters. This includes phones, laptops, printers, and some other devices like hair dryers.

Modified sine wave inverters are more common and can be used for most appliances that need 110V AC power. These inverters do tend to generate electronic noise which can disturb audio reception and even interfere with some sensitive electronic