The advanced technologies in a Dewalt 12 volt battery keep your tools running longer than ever before. Battery technology has grown by leaps and bounds in the past 15 years. It’s never been a better time to own and use Dewalt cordless power tools. However, even the newest rechargeable batteries eventually lose charge, needing replacement. When a power tool dies mid-project, it’s a huge headache.

Whether you’re using the older Dewalt tools or the latest and greatest, in this article we’ll help you choose the best batteries. 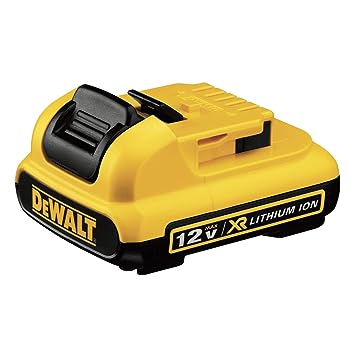 Dewalt DCB127 is an excellent backup battery or replacement for 12 volt Dewalt cordless tools. Short-time recharging is another reason why you should buy this battery.
Check Price at Amazon

Dewalt DCB127 is a standard battery used to power the most recent line of 12 volt Dewalt tools. This includes Max Series drills, reciprocating saws, worksite radios, thermometers, screwdrivers, and more. The DCB127 12-volt batteries are lithium-ion batteries and supply up to two amps hours (ah) of power. This power keeps your tools operating at full power when you need them.

The Dewalt DCB127 weighs a tiny 3.68 ounces. A lightweight battery can be a game changer when it comes to long projects requiring power tools. The battery pack can often be the heaviest part of a cordless tool, but the Dewalt DCB127 comes in as one of the lightest batteries on the market.

Another excellent feature of the DCB127 is its quick charge. It charges to full in 30 minutes on a DCB 115 charger. The DCB107, DCB112, DCB113, DCB115 & DCB119 chargers are all compatible with the Dewalt DCB127 12 volt battery. If you don’t already own one of these chargers for Dewalt batteries, you’ll need to buy one separately.

The Dewalt DCB127 is a lithium ion battery for anyone needing an additional 12 volt battery. They’re lightweight, hold a charge well, and recharge quickly. They’re an excellent backup battery or replacement for anyone using 12 volt Dewalt cordless tools regularly. 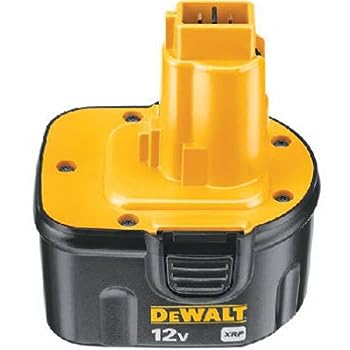 Dewalt DC9071 is a quality OEM factory battery for Dewalt tools. Removing the battery from the tool when it is not in use helps avoid running down.
Check Price at Amazon

The Dewalt DC9071 12 volt battery is made to power Dewalt 12v tools. Specifically, Dewalt cordless tools released prior to 2010. Newer Dewalt cordless tools use lithium batteries like the other batteries covered in this article. The DC9071 delivers up 2.4 amp hours (ah) of power. It’s an XRP series battery which means it comes with more battery life than its predecessors. It’s just what your tools need.

While Dewalt no longer sells the tools compatible with this battery, plenty of contractors and home project enthusiasts rely on older Dewalt 12 volt tools to get the job done.

The lifespan of a cordless tool runs much longer than the lifespan of a rechargeable battery. The Dewalt DC9071 replaces an existing battery back. The convenient, snap-in design of the DC9071 is part of what made the line of tools they power so popular. The durable, well-made tools it powers will be around for years to come with the 9071 there to keep them juiced up.

The Dewalt DC9071 12 Volt Battery Replacement is for individuals who use Dewalt tools regularly but need a fresh battery. The DC9071 replaces rechargeable batteries on cordless tools made by Dewalt from 1994 to 2010. Given the longevity and durability of Dewalt tools, we know many individuals still use older tools and simply need new batteries. The Dewalt DCB124 is a 2 pack set of high quality 12 volt lithium batteries. These batteries slide snuggly into any 12 volt Dewalt tool sold in stores today. Each DCB124 comes fully charged out of the package and ready to power up your tools. Battery technology evolved in the past 15 years. The DCB124 is a showcase example of how far batteries have come. Lighter, less prone to leaking charge when at rest, and capable of producing 3ah the DCB124 has a bright future.

Lithium batteries like the DCB124 have been a go-to for Dewalt for the past decade. The technology inside has grown more complicated, but also safer and more efficient. Lithium ion batteries are here to stay. All new Dewalt tools, including the 12v Max series, run on these batteries. The DCB124 comes with its own LED battery level indicator to help you know how much charge it’s holding. It’s a welcome feature to be able to check power levels at a glance.

This 2 pack set of batteries ensures you never run out of power. Simply let one charge while you use the other. Alternating between the two rechargeable DCB124s make the most of every moment. There’s no downtime waiting for a battery to finish charging.

Anyone using Dewalt 12 volt tools will want a set of these. They have 3ah, which is more powerful than the ones existing tools are sold with. They’re sold as two batteries together to let you use one while charging the other. It’s the perfect setup.

Unfortunately, no. The 12 volt Dewalt drill will require a 12 volt battery. It may seem like a larger battery (voltage-wise) should be able to power a smaller voltage tool. This is not the case. The 20-volt battery pack is too large to fit in the 12-volt tool. The 20 volt and 12 volt batteries are two different sizes.

Are Dewalt batteries made in China?

No. Dewalt has manufacturing facilities in Maryland, North Carolina, South Carolina, Tennessee, Kentucky, and Connecticut. Authentic Dewalt batteries will be assembled in the US. However, inside a Dewalt battery come a number of smaller battery cells and electronic components linked together. The ‘guts’ of the battery may originate from other countries. So it’s possible components inside the battery came from China as well as other countries.

Does a higher Ah battery give more power?

Yes. A higher Amperage hour (ah) battery generates more power. The DCB124 is 3ah and will have a bit more kick than the DCB127, which is a 2ah battery.