When you need to start your engine because you have flat batteries, you don’t want to worry whether the device you have will work or not. High-quality Stanley jump starters are made to do the job and more. The best Stanley jump starter can start your engine whatever the state of charge of your batteries. Most have an emergency air compressor you can use to fill your tires with air when they are down in pressure or flat.

When you get your Stanley jump starter, you will need to give it an initial charge using the mains. Once charged, you can leave the jump starter in your vehicle or at home. If you need to use it in an emergency, you just have to attach the jump starter to your battery terminals like you would with the leads from someone else’s well-charged battery and press a switch. Your engine should roar into life. If it doesn’t, there is something else wrong with your engine, not a flat battery! Stanley J7CS is a life-saver for light to moderate-sized engines. Now you can escape your worry about flat batteries when you go on a long trip or after a month of disuse.
Check Price at Amazon

The Stanley Fatmax J7CS 700 peak amp jump starter is a versatile jump starter best suited for smaller vehicles. It has an air compressor that can refill tires, although some reviewers say that it takes too long to refill a flat car tire.

This Stanley jump starter has all the bells and whistles of a larger jump starter. It can recharge small electronic devices with the 3 USB sockets, or if you need a 12V socket, you can use the integral 12V outlet on the jump starter.

Use of this Stanley jump starter is simple. Clamp the starter to the battery terminals and press the switch. As long as the jump starter has been recharged recently, you should be able to restart your engine quickly and easily. Because of its size and weight, you can leave it in the back of your vehicle in case of breakdown.

This smaller size jump starter could be a godsend if you can’t start your engine because of flat batteries in the middle of nowhere, or your tires need topping up. You just need to remember to recharge the jump starter before you go on a long trip or after a month of disuse to keep it well charged. Stanley JC509 is one of the best-selling Stanley jump starters that delivers 1000 peak amp to start the car, motorcycle, boat, RV, or even the largest trucks.
Check Price at Amazon

The Stanley J5C09 JUMPiT 1000 Peak Amp Jump Starter is one of the more powerful of the Stanley jump starter range. It boasts 1000A peak current to start just about any sort of engine, from cars to SUVs, vans, and the largest trucks.

The Stanley JC509 jump starter also has what many of the other jump starters have. It can fill up your tires if their pressure is down or you have had to make a repair far from town. The jump starter is primarily a very functional device for starting engines in an emergency but can also be used for a bright nearly all-round work light and can charge all sorts of electronic devices wherever you are.

Stanley J5C09 is one of the best Stanley jump starters available. It is a handy addition to your gear if you go off-road or far from civilization. It can hold more charge than smaller jump starters, but just remember to recharge it fully after use or every month. Stanley J309 is a handy tool for any smaller sized vehicle. Just a low price to get this mobile size jump starter in your car for emergency situations.
Check Price at Amazon

If you have a small car, but often venture far from home, this smaller design Stanley jump starter is all you need to get you on the road again if your batteries fail or you leave your lights on accidentally all night.

The Stanley J309 jump starter is fairly basic and hasn’t the extra features that other Stanley jump starters have, but this is reflected in the price.

This jump starter can still easily be used at night because it has the swiveling LED light that all Stanley jump starters have. It can also be used to recharge small electronic devices using the USB sockets provided.

This is a handy emergency tool for any smaller sized vehicle. It has basic but useful engine starting performance and some of the useful features of more expensive Stanley jump starters. It will need recharging regularly. 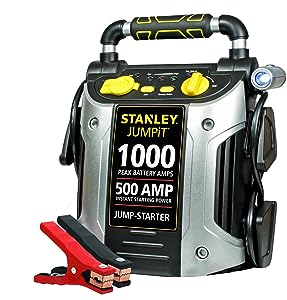 Stanley J509 is a good choice for those who want a powerful jump starter like STANLEY J5C09 but have another device or method for refilling their tires.
Check Price at Amazon

This is an almost identical Stanley jump starter to the J5C09 but lacks the air compressor, so cannot be used for refilling tires. Every other feature is the same.

It has a powerful starting charge for any size vehicle engine and good sized reserve charging capacity,

The J509 has a useful LED swiveling light, which means doing repairs in the dark are a lot easier as well as a single USB socket and 12V socket for charging small electronic devices.Like all Stanley jump starts, it has powder coated clamps for effective electrical contact with battery terminals.

This is an economically priced version of the Stanley J5C09 JUMPit jump starter with the same good starting performance, but lacking the air compressor. If you have another way of pumping up your tires, this is a good alternative. 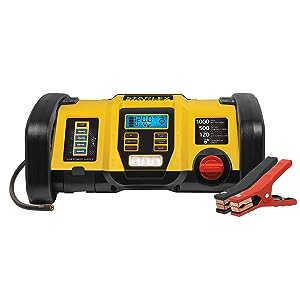 It is a heavy-duty jump starter, especially suitable for those are on a camping or on an epic road trip. It has considerable charging capacity, so it doesn’t need to be recharged regularly.
Check Price at Amazon

The Stanley Fatmax 1000 Peak Amp Jump Starter is one of the more sophisticated jump starters in the Stanley range. It has a powerful starting performance and considerable reserve charging capacity, so it doesn’t need to be recharged as often as smaller jump starters.

The Fatmax 1000 peak amp jump starter has all the bells and whistles that other larger jump starters have, such as an air compressor, LED swiveling light and charging sockets. It has 4 USB sockets together with the 12V sockets, so if you have a lot of electronic devices like cameras, cell phones, and tablets, you can keep them all well charged during your trip. The extra feature of this jump starter is that it can also check whether your alternator is charging correctly.

The only drawback is that this Stanley jump starter is noticeably heavier and bulkier than other jump starters, so you need plenty of space in your vehicle to stow it. It suits SUVs and trucks more than smaller cars.

How long to recharge a battery after jump-starting an engine?

Note that all jump starters only get an engine started when your batteries are flat. They don’t recharge your batteries. As long as your alternator is working correctly and the battery isn’t dead, you should be able to recharge your vehicle battery after running the engine for 2 to 3 hours. Just give your engine a good run.

If your alternator is faulty, you will soon know about it, because your flat battery won’t recharge. Check the fan belt and electrical connections before calling a mechanic or tow truck.

Of course, it all depends on why your batteries were flat in the first place. The best jump starter cannot be a substitute for weak batteries or badly functioning alternators, but is an emergency lifeline.

The Stanley jump starters are useful emergency devices as long as you have the room in your vehicle to stow them. They can all jump start an engine if the batteries are flat, but won’t fix any other problems with your electrical supply. If your alternator is not charging properly or your batteries are on their last legs, it may be better to get a new alternator and batteries rather than relying on a jump starter.

All of the Stanley jump starters here have a useful LED swiveling light if you get caught out at night and some sort of charging potential for small electronic devices.

Most but not all of the Stanley jump starters have an additional air compressor that can be used to keep the pressure up in your tires or pump up an airbed or bicycle tires. Some reviewers have complained about the reserve charging status of their jump starters. They do need to be recharged regularly and more often if they are at the smaller end of the range