Is your watch or calculator not displaying the numbers on its screen correctly? Don’t stress too much. The battery in your device likely needs to be reinstated.

Replacing a coin battery is incredibly easy – if you know what you need to look out for.

Although they might all look the same, CR2032, CR2025, and CR2016 batteries are essentially different. In this article, you’ll learn all you need to know to pick the correct coin cell battery.

Commonly referred to as button or coin cell batteries, these tiny batteries power more gadgets and devices than you could imagine. Despite being so small compared to AAA, AA, D, or other sized batteries, these coin ones also have lithium cells – just like your smartphone. While the names of these batteries mean they’re different; you’ll be hard-pressed to distinguish between them. That’s because the CR2032, CR2025, and CR2016 batteries share a great deal of similarities.

What you can’t see, however, is that all three of these coin cell batteries generate the same voltage. The CR2032, CR2025, and CR2016 provide 3 volts of energy through a circuit. It also means that these batteries produce the same energy discharge rate.

So, your watch or calculator is on the fritz. By opening the battery compartment, you’ll be able to replace the battery relatively easily.

Manufacturers extensively research, develop, and produce their products to be used with a specific battery type and size to meet their exacting engineering demands. Coin cell batteries are not only found in devices such as wristwatches and calculators but also found in: car keys, garage remote controls, keyless entry systems, laser pens, fitness devices (such as heart rate monitors), medical devices (such as tensiometers and glucose monitors), countless varieties of children’s toys, board games, handheld gamepads, and even as memory back-ups for computer BIOS systems, and more.

The most popular brands of button cell batteries are Energizer, Panasonic, Duracell, Sony, BrighTown, Celewell, Amazon Basics, LiCB, and AmVolt. These brands produce millions of CR2016, CR2025, and CR2032 batteries each year for the consumer market.

What do the “CR” and the number mean?

Let’s break down the labels and names of the CR2032, CR2025, and CR2016 types. These are not arbitrary names. In fact, the International Electrotechnical Commission (IEC) has designated these combinations and letters to name these types and sizes of batteries. Of course, the names distinguish the attributes of each of these batteries to better differentiate them to you and me.

The word “CR” stands for Chromium in the world of science. The IEC defines the letters for these batteries, and these three selected batteries actually contain Chromium. The “C” letter represents the chemical composition of the battery to Lithium Manganese dioxide. The letter “R” indicates the physical shape of the battery, meaning it is round. The first two numbers denote the diameter of the battery cells. In our case, it is “20” for 20 mm diameters, as we already know. The last two numbers show the thickness or depth of the battery cells. The batteries in our review actually have different thicknesses:

The capacities of these batteries are as follows:

It is essential to pay attention to the capacity (and therefore the thickness of these CR-sized batteries) as it determines just how long each different one will last.

The button cell batteries in our comparison review article can be used interchangeably – in theory. In reality, you shouldn’t use these different batteries interchangeably. Why is that? While it is true that all three batteries generate the same voltage, not all devices are compatible to work with batteries that have larger (or smaller) capacities. Manufacturers design their devices’ battery compartments to a specific sized battery cell for this very purpose. 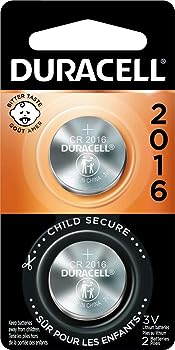 Reliable and efficient power for devices like key fobs, remote controls, thermometers, and many others.
Comes with child secure packaging. Nearly impossible to open without scissors.
Check Price at Amazon

CR2032, CR2025, and CR2016 batteries can be physically and mechanically interchangeable. The general rule of thumb is to check your devices for battery compatibility before swapping out the battery for a different-sized version. What it means is that while you can physically and mechanically interchange the batteries, you need to proceed with caution and care. A person can use a CR2032 cell in a device designed for a CR2025 or CR2016, and vice versa. However, you shouldn’t. Depending on the replacement button battery installed, the device will enjoy a longer (or suffer a shorter) service life. While the chemical composition of these coin cell batteries is similar, the stability of the voltage can differ and affect the device’s performance.

By stacking two CR2016 to replace a single CR2032 coin cell battery, a person will effectively yield the same capacity and durability as one CR2032. However, this stacking of two CR2016 batteries will cause severe effects on the device you’re powering. This is because stacking two CR2016 batteries will produce 6 volts (as each battery generates 3 volts) to pass through the electrical system of a device designed to handle 3 volts only. The higher voltage will most certainly cause the electrical wires to fry and damage the powered device’s internal components.

You could indeed use a CR2025 button cell battery to power a device designed for use with a CR2025 battery. In terms of physical and mechanical terms, a CR2025 battery is thinner than a CR2032. This means that the CR2025 will provide 40-percent less battery power in its service life to a device than a CR2032 button cell battery. The voltage and chemical composition of the CR2032 and CR2025 are similar, meaning that the CR2025 will power a device developed for CR2032 battery cells sufficiently.

However, you will need to prepare the battery compartment to better fit and connect the CR2025 battery in this instance. The battery compartment of a device compatible with CR2032 batteries means there is a 0.7 mm extra space between the connecting pin of the device and the CR2025 positive (+) electrode. In this regard, contact with the positive (+) electrode will be slightly compromised. Still, a person can use an electrical conductor, such as aluminum tinfoil, to fill the 0.7 mm extra space. This will make the CR2025 better connect to the device. In terms of performance, the device’s user will only notice that they have to replace the batteries sooner than the original CR2032 battery. 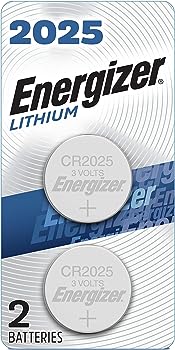 Have you ever opened a modern-day computer or laptop? Have you spotted a coin cell battery sitting on a motherboard or chipset? That’s because computers use button cell batteries to back up their BIOS settings.

Using a CR2025 or CR2016 battery in a computer will create error messages, warnings, and irregular system performance. Why is this?

While the CR2016 and CR2025 batteries share the same diameter, they don’t share the same physical depth. A person may remedy that by modifying the connecting pin of the motherboard to provide better contact with the battery’s positive (+) electrode. However, due to the CR2016 (90 mAh) and CR2025 (170 mAh) capacity, the computer’s system will detect the nominal capacity drop. It will trigger error messages, warnings and may produce irregular performance. While the CR2025 (and even the CR2016) capacity may serve to back up the BIOS settings, it will not be sufficient to perform at the levels required of the computer for sustained use. Damage may occur. This damage will potentially cost tens and hundreds of times more than the replacement cost of a CR2032 button cell battery. What’s more, the underperforming batteries will continue to create annoying error messages and malfunction until you install a compatible CR2032 battery.

Which one should you use?

There is simply no right or wrong answer to this question. CR2032, CR2025, and CR2016 coin cell batteries don’t compete against one another. They are three wholly different batteries designed for electrical power products, albeit in the same manner.

While CR2025 and CR2016 batteries can sometimes replace devices intended to use CR2032, this interchangeability is primarily due to their physical and mechanical compatibility. The rule of thumb is: If your device is designed for a certain type of battery, stick to those manufacturer instructions. A person can purchase a pack of 6, 10, or even 100 coin cell batteries.

Trying to use a smaller capacity battery in a device means you’ll be replacing batteries more often. Suppose you’re looking to save money by stacking button cell batteries. In that case, you’ll likely need to replace your device after it malfunctioned and has been severely damaged.